An evening with "Eleanor Roosevelt" with Carol Cohen lecture 🎙️ 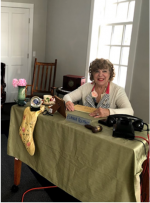 Join us for a unique "Evening with Eleanor Roosevelt”.

Author and historian Carol Cohen will give us a glimpse into the life of Eleanor Roosevelt. The presentation is free and open to all, but pre-registration is requested.

ABOUT THE EVENT: The performance, which will be part portrayal, part presentation gives the audience an opportunity to "meet" Eleanor Roosevelt at her home Val-Kill, in Hyde Park, New York in December, 1948. During Cohen’s portrayal, she will discuss Eleanor’s role in the passing of the Declaration of Human Rights Act before the United Nations in Paris, earlier that year.

Because of Roosevelt’s efforts, December 10 is designated International Human Rights Day. During the presentation, participants will learn about Roosevelt’s role as a human rights activist, via primary sources that played a major part in her personal and professional life. Cohen’s portrayal of Eleanor Roosevelt is both interesting and interactive, focusing on the period after the death of Franklin D. Roosevelt.

A vintage dessert will be served, courtesy of the Friends of the Sandwich Public Library.

ABOUT MS. COHEN: Carol Cohen on the faculty of Lesley University and is a published historian and playwright. Cohen recently published “Begin with a Box: A Hands-On Resource for Teaching and Learning” and is presently working on a book “Lessons: Learning from Eleanor Roosevelt”.

Registration for this event has now closed.